The Hornsby Art Society Members Exhibition is an annual exhibition to celebrate and promote the diverse talents of our members.  In addition to individual categories, HAS is continuing our special annual prize – the Ruth Jones Trophy for “Best in Show”.  The exhibition will feature the works of HAS Member Leonie Fisher and will be judged by the very highly credentialed John Haycraft http://www.johnhaycraft.com/ 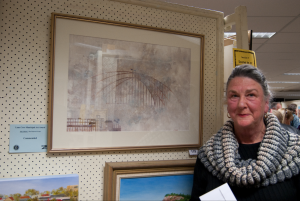